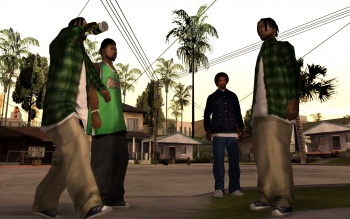 In case you missed the fantastic last-generation Grand Theft Auto trilogy and only game on a Mac OS PC these days, Rockstar has you covered.

It's difficult to overstate just how good the three last-generation GTA games were. GTA3 blew peoples' minds and ushered in the open-world revolution. Vice City took us back to the 1980s and improved on many of the concepts in the original with a neon and pastel finish. San Andreas exploded the concept onto an unbelievably massive scale - and is personally one of my favorite videogames of all time.

So in the off chance that you're one of the twenty people on the planet who has yet to play any of these games - and if, of those, you are one of the three whose only gaming device is a Macintosh PC - then Rockstar has you covered.

In a giant Q&A session on the developer's Facebook page, Rockstar announced that the trilogy would be heading to Mac before the end of the year: