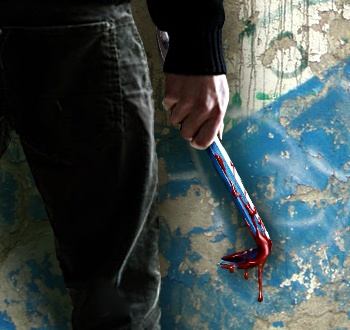 First person shooters are all about keeping your foes at a distance, and the ability to get up close and personal is an important part of that.

In the real world, rushing up to a guy with a gun when all you have is a knife is a dicey prospect at best, but in videogames, getting up in someone's grill - and then stabbing them in it - is a perfectly legitimate tactic. Melee weapons have become increasingly lethal in FPS games, but in issue 270 of The Escapist, Brett Staebell says that melee's growing effectiveness actually enriches the gunplay.

Many gamers believe that the increased potency of melee somehow detracts from the genre, but the truth is carved out by chainsaws, crowbars and fists in the messy history of first-person shooters. Close range combat, from humiliation kills to stealth assassinations, is as vital as the ballistic weapons it complements, and modern iterations embody an important trend: developers now sharpen your knife so you can stick to your guns.

Ultimately, the more important that melee becomes in multiplayer, the more it encourages long-range combat. Short-distance lethality is not so much the incentive for getting close as it is the penalty. It encourages players to uphold solid long-distance tactics. Penny Arcade's Jerry Holkins makes the same case, asserting that Modern Warfare 2's "knife is designed to be a reset. Like two misbehaving children, the use of it puts space between the two players, reverting to the optimal ranges of interdiction."

Close combat does throw up the occasional bump in the road, like players who eschew guns entirely in favor of unending stabbing, but for all the complaining and whining it may occasionally cause, Staebell thinks that melee combat is a positive addition over all. You can read more about it in his article "A Knife to a Gun Fight."