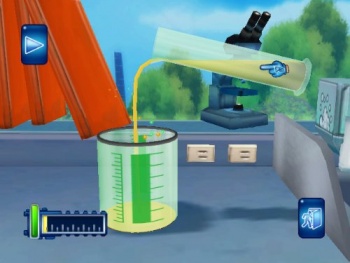 If you've got a meth lab running in the basement, don't steal your neighbor's Xbox.

It was just another ordinary September day in St. Augustine, Florida, until an unnamed 24-year-old man's Xbox was stolen. The investigation resulting from the theft led to the discovery of a methamphetamine lab next door.

The man, living at 19 Barcelona Ave., informed police that an Xbox and two controllers had been stolen from him by his neighbor and sold to a pawn shop. When police showed up at 20 Barcelona, where 36-year-old Wendy Marie Gibson resided, they found more than enough evidence to convict her, but not of Xbox theft.

Gibson had her hand in a totally different honey jar of crime and was also running a meth lab. When a deputy entered Gibson's home, he said he was hit with a "large white chemical cloud." A search found chemicals commonly used to make crank. Gibson was arrested for possession of methamphetamine, possession and use of narcotic equipment, possession of listed chemical for manufacture of a controlled substance, and grand theft.

Let this be a lesson to you, kids: Videogame theft is a gateway crime that only leads to deeper levels of corruption and delinquency. Sure, it might start with a Game Boy Advance game here and there, but pretty soon you're stealing Strawberry Shortcake: Sweet Dreams from your 5-year-old niece just so you can buy another vial of horse tranquilizer. And once you're in deep enough, there's no choice but to start up a meth lab, which really isn't as fun as it sounds. It might be tempting to steal your neighbor's videogames and trade them in for cash, but it'll lead to nothing but jail, or meth, so don't do it.