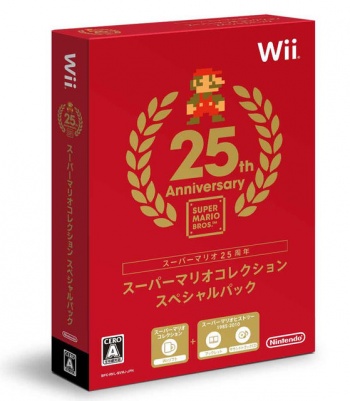 Super Mario Bros. turns 25 today, and Nintendo is celebrating with more than cake.

Though Mario was technically first introduced to the world through Donkey Kong in 1981, and made his debut as a hero in Mario Bros. in 1983, it was Super Mario Bros. that really skyrocketed him to stardom. Today marks the plumber's 25th anniversary of when he became "Super," with the game first released in Japan for the Famicom all the way back on September 13, 1985.

To celebrate, Nintendo has launched a a website filled with goodness that can mostly still be enjoyed even if you can't read Japanese. Some of the content includes videos that go over every game in the Super Mario line and drawings to win Mario-themed goodies like playing cards, tote bags, and t-shirts. There's also an interview with Shigeru Miyamoto done by Earthbound/Mother creator Shigesato Itoi, all in Japanese of course.

The collection also contains a booklet covering the history of Mario, and a CD featuring music from the NES to Wii era Mario games. It'll be priced at ¥2,500 (about $30) but has only been announced for release in Japan, much to my heart-wrenching disappointment.

However, I'm going to have hope. Super Mario Bros. was released in North America in March 1986 (and in Europe in May 1987), so it's just too early to get things started in the U.S. If the Super Pack comes overseas with the price of $30 I'll be more surprised than I was by the announcement that Duke Nukem Forever is going to see the light of day, but Nintendo has to do something for us too... right?