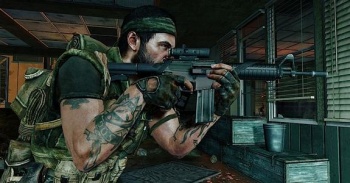 Japanese gamers won't be playing the same version of Call of Duty: Black Ops that we are in the West, after content is cut to appease the ratings board.

The Japanese version of Call of Duty: Black Ops is getting a few tweaks to make it more palatable to the country's rating board. The game has been rated CERO Z, the highest rating the Japanese system allows and the only one enforceable by law. But in order to pass, the game has had to drop the "brutal or grotesque portrayal" of limbs being removed.

Whether the game - which will be published by Square Enix in Japan, as Activision no longer has a Japanese branch - has had dismemberments completely removed for the Japanese release, or just made less graphic isn't completely clear. The article announcing it does make mention of a "ghostly depiction" for some of the "atrocities," but it's a machine translation from Japanese into English, so it's hard to be sure exactly what that means.

There will be two versions of the game released in Japan, one subtitled and one dubbed. This is supposedly to accommodate Japanese gamers who want to play the game with English voices - although I'm not entirely sure why that would require a separate version. Square Enix specifically states that aside from the voice tracks, both versions of the game are identical.

There's bound to be a bit of head scratching at this news, as most people will have seen, or at least heard of, some very violent media coming out of Japan, but clearly, the standards for videogames are different from those for movies or anime.

Call of Duty: Black Ops is released on November 9th.