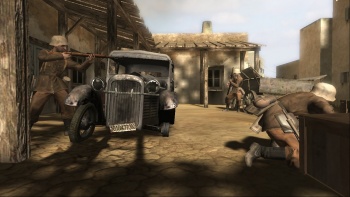 A study has found that fast thinking is a little easier if you've got a few rounds of Halo or Call of Duty under your belt.

A study performed by cognitive scientists at the University of Rochester suggests that playing action games can improve the speed at which you make decisions, without negatively impacting the accuracy.

The researchers tested groups of 18-25 year-olds who did not normally play videogames, who either played Call of Duty 2 and Unreal Tournament, or The Sims 2 for 50 hours. After the training period was finished, the subjects were asked to make quick decisions in a series of specially created tasks, like decided whether a cluster of moving dots were mostly moving left or right.

The study found that those who had played the action games were up to 25% quicker at making their decisions than those who had played The Sims 2, with no difference in the number of correct answers. Professor Daphne Bavelier, one of the scientists conducting the research, said that enhanced speed could make all the difference for all kinds of high-pressure situations, from surgery to military command. Bavelier says that the reason action gamers react so much quicker is due to a process called probabilistic inference, where the brain gathers little pieces of information until it has enough to make a decision. People who play action games are more efficient at accumulating this data, which means they can make decisions more quickly.

It seems likely that this boost to decision making wouldn't just apply to first person shooters, but to any game that forced you to react quickly. Even The Sims, if played in the right way, can be pretty intense. It's also always good news when games are discovered to have a positive effect on the brain, rather than being accused of turning people into killers.

Source: Physorg via 1up