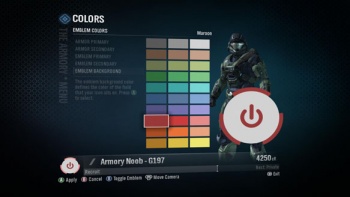 Bungie and Microsoft may have parted ways, but the Halo developer isn't above taking a lighthearted jab at its former employer's hardware issues.

In case you missed it, there's a new Halo out today - and it's superb. This marks Bungie's departure from the fantastically successful sci-fi franchise it created, and also the end of its partnership with Microsoft.

Bungie might have bought itself back from its former owners in Redmond, but there's no indication that their parting was anything but amiable. Still, that's no reason that Bungie can't give Microsoft a friendly little punch in the ribs one last time, right?

As gamers across the world sit down to start playing the hell out of Halo: Reach, Bungie has posted a tutorial on its site explaining how the armor customization feature in the game works. As with previous games, players can edit their own emblems (I made mine a pretty unicorn!) to display in multiplayer. For instance, shown here is ...

Wait a minute. That emblem looks almost familiar, doesn't it? Hmm, I wonder where I've seen that before. It's almost like Bungie is referencing something notorious in the gamer community, but I can't quite put my finger on it.