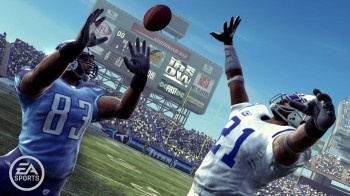 The more controversial of EA's efforts to generate revenue from pre-owned sales has apparently met with a very positive response.

EA didn't make many friends when it announced that consumers who bought an EA Sports game pre-owned would have to pay $10 for an "Online Pass" if they wanted to play online, but according to Eric Brown, the company's CFO, it didn't lose very many either.

Speaking at the Deutsche Bank 2010 Technology Conference in San Francisco last night, Brown said that there had been no consumer backlash to the program, and in fact, the reception had been very positive. Brown thought that retail customers understood that bandwidth wasn't free, so they didn't think that EA's move to "diffuse or cover" the cost of online play was unreasonable.

Brown's explanation will likely raise a few eyebrows, as buying a game pre-owned doesn't increase the pool of possible online players, it just swaps one out for another. Moreover, for every pre-owned game that exists, someone has paid the full retail price, which would presumably cover the bandwidth costs. Regardless, this success means that the Online Pass, and similar schemes from publishers like THQ, is here to stay for the foreseeable future.