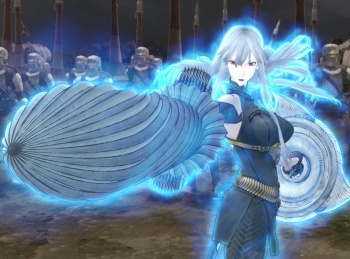 Valkyria Chronicles 3 has been officially revealed, but hopefully fans want another handheld version.

Rumors began to swirl that Sega had a new Valkyria Chronicles game in the works when a teaser website popped up and a slip-up led to an almost confirmed reveal at the Tokyo Game Show. Thanks to Famitsu magazine, we don't have to wait until Sega's announcement to know that the game is real.

Which is a great thing for tactical strategy fans, but not for those that only enjoyed the first game in the series on the PlayStation 3. Famitsu revealed that Valkyria Chronicles 3 will be following in the sequel's footsteps and will only be released for the PSP.

Sega might not see another console-bound Valkyria Chronicles as something that will be profitable enough, as series producer Shinji Motoyama says that a short development time was the reason the series is sticking to handhelds for now, and that Sega needs an "innovative idea" to keep it going on the PS3 so it will "stand out." Valkyria Chronicles 3 focuses on a "Nameless" squad of delinquent military members. It's surprisingly scheduled for January 27, 2011 in Japan, less than a year after the previous title's release.

There Are no Sequels Pocket Gamer 17 Comments