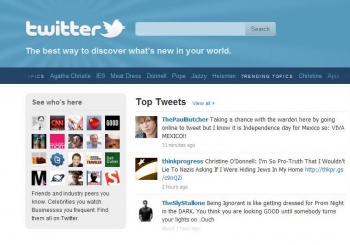 A Pennsylvania college hopes to remind students what it's like to be free from social networking.

Anybody that uses Facebook or Twitter knows of the addictive behavior it can promote, sometimes becoming a necessity of someone's daily (or hourly) life. Pennsylvania's Harrisburg University of Science and Technology is conducting an experiment to show students what it was like before social networking websites existed.

Provost Eric Darr is instituting a campus wide social media "blackout" that includes Facebook, Twitter, and instant messaging. Kids are going to have to go back to passing notes in class and actually talking face to face if they want to communicate. I know, it's unheard of.

One student says that her main issue with the blackout is that she won't be able to find people anymore, because she uses Facebook and Twitter to "see where they're at." In other words, she won't be able to Facebook stalk for a week. Another student said that social media is a "24-hour thing" and he had to wean himself off of it just so he could sleep at night, even before the blackout, so he could definitely use a reminder of the old days.

Contrary to how this may seem, Darr isn't punishing students. He says this is an academic exercise and will have students write reflective essays about their experiences during the blackout. He wants students to become aware of the way they currently use technology, with social media in many cases now replacing previous means of communication.

Though it'll probably be tough to keep students off of everything related to social networking, the college will at least block access through campus computers. The blackout will cease at the end of this week. Just like World of Warcraft or any other activity, Facebook and Twitter can become addictive in excessive amounts, so maybe this experiment will help kids to realize that they don't need to be on it all the time.