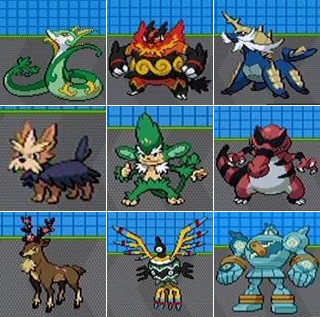 Copies of Pokemon Black & White have been released early in Japan, which means that the entire roster of newfangled Pokemon is yours for the viewing.

Nintendo has been keeping its hand very close to its chest regarding the designs of the new set of Pocket Monsters found in the upcoming Pokemon Black & White, only releasing a few new 'mons at a time thus far. But with the game's September 18th release date days away, advance copies of the game have begun to hit store shelves (and torrent sites) over in Japan. Naturally, the datamining scene has been all over this - and has ripped the sprites of every single Pokemon found in the new Isshu region.

Pokebeach has the full collection, and the first thing you'll notice is that the leaked images that were supposedly the evolution of the new starting Pokemon ... were 100% on the money. On the down side, it looks like yes, we do in fact have another Fire/Fighting starter.

So, how is the new roster? Overall, not bad. There are some really cool designs, like the incredibly manly evolution of the incredibly cute deer, the sunglasses-wearing crocodile, and the afro-sporting bison. There are some Pokemon that seem to have had a nifty idea behind them - like the gothic lolita 'mon, or the Flying-type Pokemon inspired by the Nazca Lines - but that just turned out strange. And then ... let's just say that some of them are really weird in general, and leave it at that. But then again, the first generation had Magmar, Lickitung, and Jynx, so we've always had to deal with weirdos.

I will readily admit to wanting to hug that Yorkshire Terrier one, though. It's just too cute!

Other leaked information includes the different types of gyms encountered in the player's journey through Isshu - including a variable-type gym that changes depending on which starter you picked. Tricksy little Pokemon trainers.