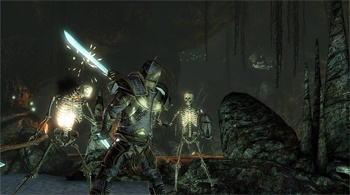 Hey, guys? It doesn't bode well when you delay your game on one continent and decide to indefinitely withhold it from another.

Two Worlds II was supposedly going to hit store shelves this week, but it seems that SouthPeak Games has quietly delayed the game's released without warning. The new release date here in North America is now October 5th. In Europe, however, no new release date has been announced.

No reason for the delay was announced, and the publisher is being especially mysterious when it comes to details about the European release. According to Eurogamer:

The plot thickened when Eurogamer asked for clarification on when the sprawling fantasy RPG will be released: "TBC," we were told by the publisher. TBC? For a game supposedly due out this autumn?

Retailer ShopTo increased suspicion of a delay, telling Eurogamer that publisher SouthPeak had said "late October at the earliest" when the two companies spoke "the other day".

Of course, it bears noting that SouthPeak might just be holding off on announcing any details abecause it doesn't know if copies of Two Worlds II will be seized before they can be sold in stores. Such was the case last month, when some 40,000 game copies were seized and promptly auctioned off for a pittance of their actual worth.

So, if you happen to live in Europe and were really looking forward to Two Worlds II, it looks like you're up the proverbial creek without a paddle for the time being. Try to look at it this way: Those of us in North America who end up playing the game before you do will basically be guinea pigs, saving you a headache if the game's as bad as its predecessor was.