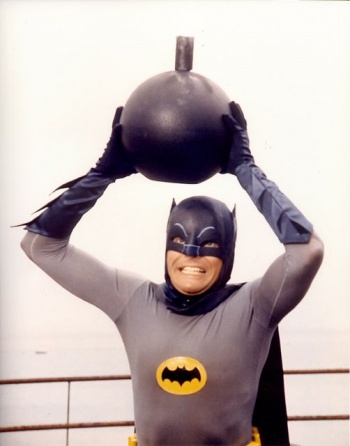 A program started by the U.S. Air Force focuses on making soldiers as versatile as the caped crusader.

Batman is awesome, but only because he's so smart. He figures out exactly what he'll need in the field and stuffs in all into his Batsuit and utility belt. This is exactly what inspired the U.S. Air Force's "BATMAN" program, which aims to develop new equipment so that soldiers are as capable as Batman himself.

BATMAN stands for Battlefield Air Targeting Man-Aided kNowledge. Sure, it cheats, but who's really going to criticize the Air Force when it's running a program called BATMAN? BATMAN program engineer Reggie Daniels says: "[Batman's] devices allow him to have an advantage. That is what we're trying to do."

The goal of BATMAN is to make soldiers "lighter, smarter, and deadlier." Where a soldier on today's battle field might have to lug 160 pounds of equipment around, Batman is seemingly able to carry even more gadgetry without the weight. The Air Force says this weight is a burden, and hopes to make soldiers more able to complete their missions with less burden through BATMAN.

The program uses the "human chassis" as its Batsuit, with engineers focusing on how to make it more agile by moving equipment to less straining areas of the body. BATMAN is pioneering the use of chest mounted computers and speech recognition, in addition to batteries that get lighter as they're used.

The most Bat-like object is the "Bat Hook," the nickname used for the Remote Auxiliary Power System developed by Defense Research Associates that was also inspired by Batman. DRA's lead test engineer recalls thinking: "You know what would be really cool? Something like what Batman has on his belt that he can take out and wing it up to a power line and get power." The Remote Auxiliary Power System has a hook that can be thrown onto power lines, with a razor inside that will cut tap into them. Power can then be siphoned from the hook through a wire that will recharge a soldier's devices, if necessary.

Future developments are still underway in the BATMAN program, such as a light-based communications system that can be used instead of wiring. Batman's array of gadgetry always seemed like it was impossible for anyone but billionaire Bruce Wayne to create, but the Air Force is pretty rich too.