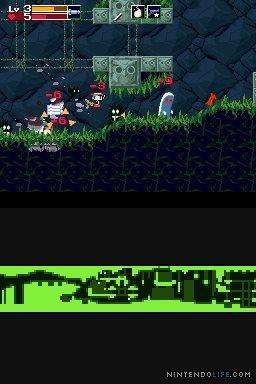 The indie world's darling platformer Cave Story is coming to handhelds and should show the quality DSiWare can support.

The Nintendo DSi's digital download service DSiWare might have the likes of Dragon Quest and Game & Watch on it, but it's really no XBLA when it comes to title selection. Nicalis producer Tyrone Rodriguez hopes to foster a change with the release of Cave Story on the platform.

Cave Story was originally released on the PC by a single Japanese developer who never expected it to become one of the most popular indie titles around, and a recent hit on WiiWare. After many rumors and homebrew projects that aimed to bring it to handhelds, Rodriguez has the game's DSiWare version completed and it's now in a testing phase.

Tiny Cartridge questioned Rodriguez on his motives for bringing Cave Story to DSiWare, which isn't as popular as the PlayStation Network or Xbox Live Arcade. Rodriguez doesn't think DSiWare is the problem, but the games being released on it. "If gamers and the media aren't happy with DSiWare, it isn't because the DSi isn't capable of good games, it's because of some publishers that constantly republish shitty mobile games and charge four times as much for them on DSi," he said. "Maybe games like Shantae and Cave Story will make players have something good to download on their DSi."

Though Rodriguez calls Cave Story for DSiWare "more a perfect port of the original game," it'll be improved in certain ways for its DSiWare release. A map screen has been added, which in addition to the inventory screen and dialogue boxes, will appear on the DS's lower display. Not all of the WiiWare version's additional modes can realistically be included for the DSiWare version, but those that make it are set to be announced later.

Players will be able to download the fun platforming romp through a world filled with dangerous elephants and toaster bosses "hopefully by Halloween." Rodriguez says he'll be "surprised" if Cave Story isn't released on DSiWare by the "end of the year." As for price, he says: "That's not necessarily up to us, but I'd say expect to pay a price indicative of the experience and amount of gameplay in Cave Story."