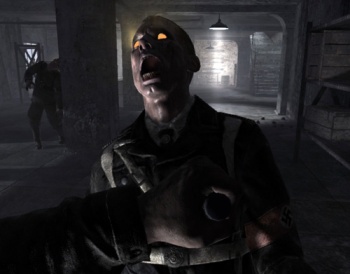 Treyarch is bringing zombies back in Call of Duty: Black Ops, but probably not the same ones seen previously in World at War.

In the past few months, zombies were all but officially confirmed to be making a return in Call of Duty: Black Ops through a retail description, recent strategy guide listing, and various other channels. Now that we can stop speculating and know they'll be included, Treyarch has revealed that the studio will likely be making zombies even cooler than they were in Call of Duty: World at War's Nazi Zombies mode.

What made this World at War mode so fun was the ability to team up with friends to just annihilate wave after wave of zombie attackers while defending an area. It also had a bit of story attached to it, though this wasn't exactly the main focus.

Treyarch recently alluded to Edge magazine that Black Ops' zombie mode will improve on World at War's, possibly with more story. "We continued to evolve [Nazi Zombies] after World At War," Treyarch head Mark Lamia said. "There was a dialogue going on with some of our hardcore community, and we were able to interact with the community and evolve. We did that with our zombie lore."

Treyarch could plan on keeping the "zombie lore" going, as Lamia looks back positively on interaction with fans. "I definitely think there's something very exciting about interacting in a live way, and being able to respond," he added.

Black Ops takes place decades later than World at War, but zombies potentially have an unlimited life expectancy and may have survived in an underground bunker somewhere, or some psycho just created brand new ones. We'll have to wait to know if they're connected or not until more information comes out on the upcoming mode in Black Ops, or until November 9 when the game is released.