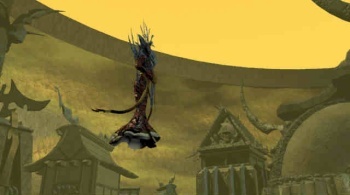 Hold on to your brain-box, berks, because the chant is rum today: Planescape: Torment has landed on Good Old Games.

Okay, so maybe GOG dropped the ball with that whole "going out of business" thing. And then maybe it gave the ball a kick, and it smacked you in the junk, and that stung a bit and now you're mad and you don't want to play anymore. But nothing says I'm sorry like a classic RPG trip through the City of Doors.

Planescape: Torment from Black Isle Studios was an absolute high-water mark in the RPG genre, which makes it an even greater shame that nobody played it. It was a great story, brilliantly told, and it eschewed many of the usual RPG conventions in order to craft a much more compelling and affecting experience, but it also sold very poorly, quickly becoming the red-headed stepchild of the Infinity Engine family. Fast-forward a decade, however, and the game has become a legend, due in no small part to the obscurity that followed its original release.

Now, thanks to the Good Old gang, RPG lovers everywhere finally have the chance to see what all the penny-gush is about. Unveiled today, the Planescape: Torment release on GOG includes a digital copy of the complete owner's manual, a pair of wallpapers, the soundtrack, 16 avatars, 104 "artworks" and a book by designers Chris Avellone and Colin McComb. The game retails for $9.99 and, like everything else on GOG, is entirely DRM-free.

Planescape may not have the instant accessibility of a Diablo or a Dragon Age but for an RPG with some serious meat on its bones, you simply cannot do better. This is a game that will stay with you long after it's over and may even change your entire outlook on the narrative potential of the genre. And even if it doesn't, it's still a hell of a game. What can change the nature of a man? Find out at GOG.com!