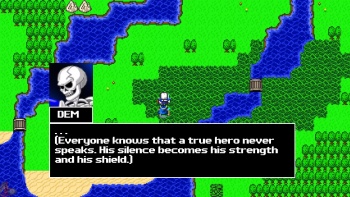 Moving 30,000 units isn't much for the big guys, but it's a lot when you're selling an indie RPG on Xbox Live.

Zeboyd Games has announced that its Xbox Live Indie RPG Breath of Death VII: The Beginning has sold more than 30,000 units to date in less than 6 months. The game has proved that smart pricing, proper development scope, and free marketing through the media can make even a simple game from a previously unknown studio a success.

In a post-mortem, Robert Boyd - half of Zeboyd's team of just two - looks back on what went right with Breath of Death VII (which is really the only game in the series, by the way). When the game was released in April 2010, sales were generated primarily by the media instead of advertising. Zeboyd looked to forums, websites such as YouTube, and to email blasts aimed at reporters and reviewers to create buzz rather than advertising spend.

Zeyboyd's development scope was another factor that led to success at 30,000 units sold. The team kept everything simple from graphics to combat to the total length of the game. Focusing on a 4-6 hour game that provided retro visuals and fast-paced combat allowed Breath of Death to be created in less than 3 months.

A shoestring budget and Breath of Death's $1 price were also key. Boyd says: "Even including the $100/year [Xbox Live Indie Games] membership cost, we probably spent under $200 total." With a budget like that, and a 3 month development time, you get to see how 30,000 sales is a success for a studio's first game. However, the small budget wasn't the only reason Breath of Death was priced low.

Boyd says Zeboyd risked that "a low price would help us to build up a fan base and garner us free publicity which would help with marketing our future games," and thankfully it paid off. He estimates that competing Xbox Live Indie RPG Aphelion has sold 2,000-4,000 at its $3 price, and attributes Breath of Death's much higher sales to its cost of $1.

So if you want to make your own games, Zeboyd has proved that with some skill, and some luck, Xbox Live Indie Games is definitely a valid platform to explore. Zeboyd is already hard at work on finishing up another RPG in the same vein called Cthulhu Saves the World that will improve on Breath of Death in every way, though it'll rightfully cost $3 this time. It's projected for release in October, with Zeboyd hoping to bring a possible double-pack of both titles to the PC later, but no official release date has been announced yet.