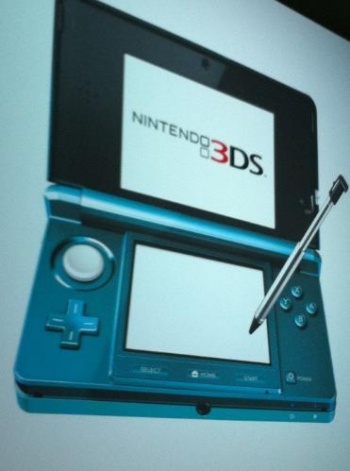 Nintendo's 3DS press conference has revealed its official release date and new features, but hopes of seeing 3D in 2010 have been dashed.

The mysterious Nintendo 3DS remains mysterious no longer. Nintendo held a press conference in Japan today where it unveiled the handheld's Japanese release date, pricing, and a few new features.

Nintendo announced that Miis are coming to the 3DS through its new Mii Studio. Users can take pictures of themselves to use as a template for creating Miis, which works sort of like tracing apparently. Miis can be converted into a QR code, put on an SD card, and then displayed other places such as a website and scanned by the 3DS so they can be shared. The 3DS will constantly be "Wi-Fi aware," and can download Mii data from other users even in sleep mode from Wi-Fi hotspots or other handhelds through an enhanced Tag mode.

This Wi-Fi awareness isn't limited to Mii data though, and can also be used to download updates or game data such as rankings, racing ghost times, or Street Fighter IV 3DS fight requests (revealed by Capcom's Yoshinori Ono). Another new functionality added to the 3DS is the ability to pause a game to multitask, perhaps switching to the web browser or camera, after which players can jump right back into their games. Some of the other applications were called "Memory Notebook" and "Number of Steps," leading to the possibility of an included pedometer.

Something fans have been clamoring for is the addition of a Virtual Console-like store on the DSi, and Nintendo is going to be adding it on the 3DS with a store for Game Boy and Game Boy Advance games. It'll also allow users to download "classic games" that can be played in 3D. Even further, Nintendo revealed that a handful of augmented reality games will be included with the 3DS hardware; stuff like this basically. According to Joystiq, the 3DS will allow players to transfer their downloaded games between handhelds, though these transfers may be limited, but that's better than the zero transfers gamers are given with the DSi now.

That's basically all Nintendo had to reveal, but at least the release date speculation can end. DS owners will have to be content with two dimensions for 2010, but the revolution of glasses-free 3D will begin in early 2011.

Source: 1up, Andriasang, Joystiq
Image via 1up