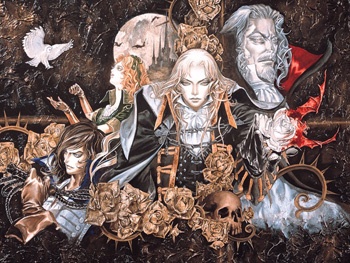 When it started work on Lords of Shadow, all MercurySteam wanted to do was to create a game worthy of the Castlevania title - and the producer thinks his team succeeded.

It has been noted by some (including yours truly) that the upcoming Castlevania: Lords of Shadow looks a lot like games that aren't Castlevania - Prince of Persia, God of War, even Shadow of the Colossus. Speaking with CVG, though, MercurySteam producer David Cox assured fans of the vampire-slaying series that the developer's chief aim was to "make a game worthy of the Castlevania name."

Still, said Cox, though the game was aimed at long-term Castlevania devotees, it was "first and foremost" a game that people who weren't already fans could enjoy, too. "You don't have to know Castlevania lore - but you can enjoy an epic quest that will last 20 hours."

According to Cox, MercurySteam's game had been one of three pitches Konami had considered regarding a potential reboot of the Castlevania franchise, though it's unclear whether all three pitches had been from MercurySteam or if the Madrid-based developer had been competing with other studios for the game. In the end Konami went with the idea that would eventually become Lords of Shadow - and Hideo Kojima had been so impressed by the pitch that he'd offered to lend MercurySteam a hand.

Cox also addressed criticisms that Lords of Shadow resembled other well-known games more than a little bit. "I understand that people often need to pigeon hole a game before they have seen it, to explain a point. Yes, there are similarities: 3D, Titan battles, etc. but there is a lot in Castlevania: Lords of Shadow that none of the others do."

I'm not saying that you're wrong, Mr. Cox, but some examples would be nice. Is Lords of Shadow different in that there is backtracking and exploration like we've come to expect from the "Metroidvania" style? Or is it just different in that God of War doesn't let you fight Dracula?

To be fair, Cox makes an admittedly good point: The Castlevania series is so long and storied by now that it could well have influenced other games - and an attempt to recapture the feel of early Castlevania might in turn resemble those games, too. "At 25 years old - it is fairer to say that the games you mention owe as much to the Castlevania series, as CLOS does to them!"

With Lords of Shadow out next week, I'll give you the benefit of the doubt for now, guys. Like I said last time, I'm easy to please - just throw a few of the classic Castlevania tunes in there, and we'll be golden.