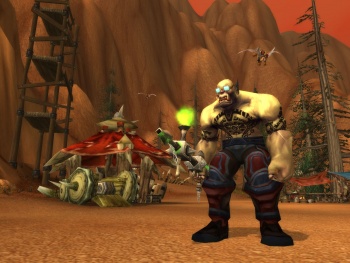 The day that will live in infamy in Azeroth may be here sooner than you think.

Thus far, Blizzard has been characteristically tight-lipped regarding the release date of Cataclysm the third expansion for its mega-MMOG World of Warcraft. It'll be out when it's done, of course, and not a moment sooner.

We may now have some idea just when, exactly, that moment will be: December 7th.

This is an unofficial date and has not yet been confirmed by Blizzard, of course. Still, there's a fair bit of evidence supporting the theory: Two WoW fan sites (MMO Champion and WoWHead) both independently noticed that the latest patch notes contained the following information:

"Arena battles and Rated Battlegrounds are only available during an active player versus player combat season. Season nine will begin on December 14th, so be prepared at that time to take your shot at glory!"

Some of you may be saying, so the new arena season begins on December 14th? That doesn't really tell us anything unless we're fans of PvP combat, right? Maybe, maybe not - but then we have this post from official Blizzard representative Zarhym, which says that the new arena season will begin "approximately one week after the official launch of World of Warcraft: Cataclysm." Not only is December 7th a week before the planned new arena season, it's also a Tuesday - the day on which Blizzard (and indeed, most major developers) releases all of its games.

If that wasn't enough, a WoWInsider poster also spotted a throwaway line in one of the fluff pieces surrounding the retaking of Gnomeregan event: "[With] the fall of the Lich King, the last great threat to the citizens of Azeroth, the chance of any cataclysmic event taking place in the foreseeable future is 'less than 12.7%,' Mekkatorque's leading combat medical advisor Doc Cogspin purported."

As always, this is a rumor and shouldn't be taken as the gospel truth until we hear something official from Blizzard - but if you wanted to start booking your days off in advance right now, I don't think we'd blame you.

Incidentally, this means that the expansion will have been in a beta testing stage for six months at launch, half again as long as either of the previous two. I guess there's just more to test this time around.