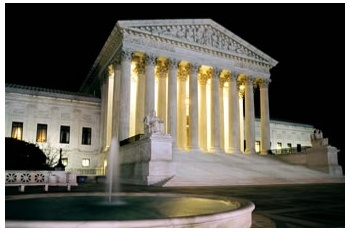 Two law schools tackled the issues in the controversial Schwarzenegger v. EMA case in mock trials, but they each favored a different side.

It's a staple of law schools and debate teams around the world to conduct mock trials, or moot courts, to teach students about the inner-workings of the court room. This week, the results of two moot courts were released that portrayed how the participants believed the Supreme Court would decide on the proposed law in California which would restrict the sale of videogames like porn or guns. The moot court at the Institute of Bill of Rights Law (IBRL) at William & Mary Law School included several notable journalists and appellate judges acting as the Supreme Court, and they upheld the California law as Constitutional with a vote of 6-3.

An attendee said that the only videogame that was mentioned during the proceedings was Postal, implying that all games are similar. Perhaps that's why the court voted that the law was Constitutional if it prevented Postal from getting into the hands of a child.

In contrast, the New York Law School held a moot court that contained evidence about the sexual content of games, as opposed to violence. No decision was given, but a source said that the evidence needed to be fudged in order for the State of California's position to hold any weight at all.

At the New York Law School, third year law students Andrew Blancato and John Hague wrote the bench brief to submit to a moot court competition. The brief describes a fictional game called Adventures in Chebowski Land, which is just as silly as it sounds. Most of the brief is legal jargon that admittedly makes little sense to me, but some of the statements are undeniable:

Respondent should focus on the possibility of a small jurisdiction acting as a censor for the entire Internet. They should argue that anything less than a national standard could potentially suppress an inordinate amount of expression.

If the local standard was permitted, the application of a local Amish community's understanding of obscenity would act as a censor on the whole of the nation in terms of material published on the Internet.

I don't know about you, but my idea of obscene differs greatly from most people I meet, let alone what Amish think. So if I'm ok with my son buying games that an Amish person doesn't want to be sold, then I'm out of luck? How does that work?

And because the New York Law School's case was about sexual content in games, this little quote from the lawyer arguing for the censorship position was amusing. When asked if there was any evidence of females being susceptible to deviant behavior when exposed to games, the lawyer responded:

Your Honor is correct that the study in Exhibit B does not contain effects on women. However, the article in Exhibit B does contain anecdotal evidence from a teenage girl who played the game and subsequently got pregnant because the game awoke something in her.

Which is just pure comedy gold.

Here's hoping that the real Supreme Court takes this issue seriously when it hears arguments on November 2nd. Click here to find out more about the case from Hal Halpin, ECA President.

Source: Gamepolitics and the ECA