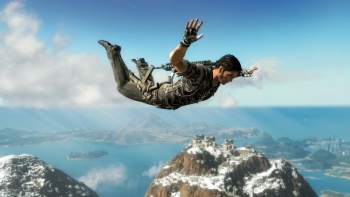 Just Cause 2 has inspired some amazing feats including the deaths of 1.5 billion soldiers and 26 million hours of play time.

The open world game Just Cause 2 offers the fictional island nation of Panau as a sandbox for players to jump out of planes, hijack military vehicles and generally wreak havoc by blowing installations and killing criminals. Avalanche Studios, the makers of Just Cause 2 released some really amazing stats collected over the six months since the game has been out. Some gamers have relished the freedom that Just Cause 2 gives them, including one gamer who has played for over 1,100 hours. That's over 45 days, people, in just six months. And Just Cause 2 isn't even an MMO.

I have to admit that even though I wasn't a fan of the game's storyline and cinematics when it came out in March, and I thought the parachute travel mechanics were frustrating, these stats kind of want me to pick up Just Cause 2 to try some of this stuff out.

Base Jump Facts and Figures:

In total, over 1.5 billion soldiers have been killed, roughly equivalent to one quarter of the popular of the Earth. Broken down as:

Taking down the game's 50 colonels has proved no mean feat, with only 16,741 players accomplishing the task.

Players have caused well over 1 billion explosions across the island, including some serious damage to Baby Panay's pride: