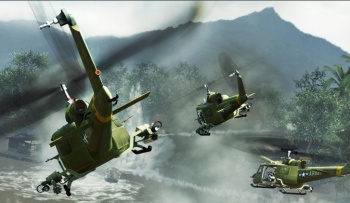 If you live in Germany and plan on getting the upcoming Call of Duty: Black Ops, you may want to consider importing it.

German politicians may have nixed the proposed ban on violent videogames earlier this year, but that doesn't mean the country is all hunky-dory with its blood and guts. Next month's Call of Duty: Black Ops - almost certainly one of the biggest games of the year - has been censored in its German release.

So what's been taken out? According to CODFeed, the violence has been expectedly trimmed down. As far as the campaign is concerned, a scene "where an enemy is shot in slow motion with copious amounts of gore" has been tamed down, and one involving the violent torture of a prisoner has been removed entirely. Meanwhile, explosions will no longer cause limb loss on the part of characters. The game has also been cleansed of what Germany deems "anti-constitutional symbols," whatever that means.

Perhaps the most perplexing excision, however, is the removal of the Rolling Stones' "Sympathy for the Devil" from the game's soundtrack in the German release. Given that it is the only song to be cut from the Black Ops soundtrack, it's unlikely (though still possible) that this has anything to do with potential licensing issues.

The only possible reason that comes to mind is that the song's lyrics mention World War II and the blitzkrieg - but only in a single verse. Germany is known for being quite sensitive with regard to World War II references (albeit not without good reason), but is that really enough to get the entire song removed from the game?

Ah well. At least German gamers can still nip on over to one of the other nations in the EU to pick up the regular, non-censored version of the game if it means that much to them.

On an unrelated note, while writing this I mistakenly called the game "Treyarch: Black Ops." That seems like it'd be a fun game to play, though I don't know if game designers would be particularly good at wetworks.