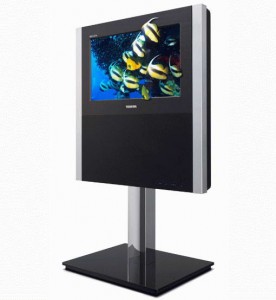 Toshiba's new glasses-free 3D televisions have the same electronic brain as the PlayStation 3.

Toshiba unveiled its anticipated line of glasses-free 3D televisions today, and also revealed the basic method through which they work. Using the Cell processor, the same CPU found in the PlayStation 3, the new television sets are able to get rid of the 3D revolution's glasses barrier and provide a 3D experience more similar to how the average consumer currently watches television.

The new LCD televisions are said to use a special filter sheet placed over their high-definition screens and contain an internal Cell processor that outputs information from nine images created in real time for every single frame of whatever is being displayed. The filter angles these images to ideally shoot a different signal to the right and left eyes of a viewer, similar to how the Nintendo 3DS works. This technology isn't quite perfect yet, with viewers testing the new TVs noting that the display got blurry when viewed from side angles, but Toshiba admits that it's best viewed within a 40-degree zone and from a certain distance. Toshiba's new products are still better than previous glasses-free technology that required viewers to sit in a single spot.

Toshiba president Masaaki Oosumi even says that the glasses-free TVs can convert 2D into 3D, and calls the new line "dream" TVs. The company will initially sell a 12-inch model for ¥120,000 ($1,440) and a 20-inch model for ¥240,000 ($2,880) and they're both planned for release in December. However, Toshiba will only be selling the glasses-free TVs in Japan for now, with no announced plans to bring them to Europe or North America. Oosumi did say that the technology would have to be brought to larger televisions to succeed in overseas markets, with a 56-inch prototype also on display.

Toshiba hopes to sell 1,000 units of the pricey 3DTVs per month for now. The technology sounds awesome, but priced at somewhere around 10 times the cost of a normal HDTV, I'm sure they'll face a battle making their way into people's homes until the price comes down. Not that that's anything new in the world of electronics.