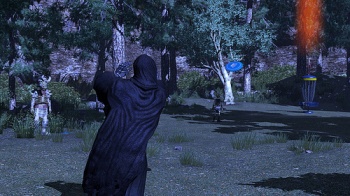 A DLC pack for Sony's Sports Champions will make disc golf scarier than ever before.

Previously, the scariest thing I'd ever seen while playing frisbee golf was a couple of 20-year-olds I could tell hadn't showered in a while. Thanks to an upcoming DLC pack for PlayStation Move title Sports Champions, now it's some seriously creepy denizens of hell.

Sony has announced the release of the Sports Champions Haunted Pack DLC, which will reskin your once human characters as either a Specter (which looks like Death), an armored skeleton named Deadmund, or a regular skeleton named Numbskull. Considering the cheerful nature of Sports Champion's normal characters, the new skins are quite frightful.

The $4.99 DLC pack also includes new equipment. Players will get the phantom disc set for disc golf, the skull bocce set for bocce, the phantom paddle for ping-pong, a skeleton sword and shield for gladiator duel, a skull bow for archery, and a skull ball to use in beach volleyball.

There's something about playing beach volleyball with a skull as the embodiment of death that really appeals to me. Unfortunately, the $4.99 price appeals to me a little bit less, but whether it's worth it or not to you depends on much you like the undead. The Haunted Pack is due out on October 5.