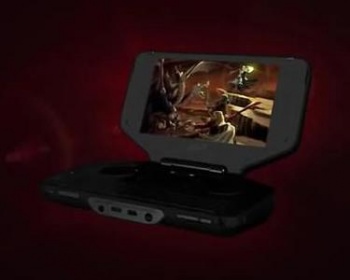 Analysts agree: Panasonic's new MMO-focused handheld faces an uphill battle through the center of a volcano while wearing a tank-top.

If you didn't catch the announcement of Panasonic's new handheld videogame system called the Jungle, well, now you can catch up. Whether catching up will actually matter or not is the question, as multiple industry analysts have serious doubts that the system will have even a modicum of success.

Speaking to IndustryGamers, two analysts called the Jungle a "non-starter," while others questioned its potential. Billy Pidgeon of M2 Research says he sees the Jungle as a "highly specialized dedicated portable for a non-existent market." He added that "MMO players" might buy it if they want "more than a laptop," but said: "Frankly, this looks like a non-starter."

David Cole of DFC Intelligence noted that Panasonic has wanted to get back into the games business for years, after having a short go at it in the 1990s with the 3DO. His comments mirror Pidgeon's, with Cole saying: "My inclination would be to say a system like the Jungle is a non-starter right out of the gate." He points to companies like Sony and the tools that enable them to compete, and adds: "Until they can show me otherwise I just don't think Panasonic has the right pieces to compete in this space."

EEDAR's Jesse Divnich says the Jungle's success will "come down to software support," and without that the handheld will fail. Colin Sebastian of Lazard Capital Markets thinks it "would seem like an uphill challenge to launch a new portable gaming device unless there is some meaningful differentiation or access to proprietary content."

If it were one analyst questioning the Jungle, that'd be a different story, but these guys are lined up in a row bashing the Jungle in seemingly every possible way. Playing devil's advocate, the Jungle is a unique product, being a handheld made to run MMOs currently played on PCs, so maybe it's just something so new that industry analysts can't see any positives. They may also be jumping the gun, as key information needed to judge the Jungle, such as technical specifications and exact ability, hasn't been released yet. The easy route is to speak negatively about it, but you never know, the Jungle could surprise everyone. Maybe.