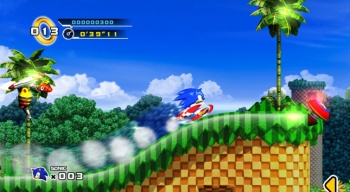 Somehow, Sonic the Hedgehog fans have got the reputation that they are hard to please and will nitpick a new Sonic game to death because the physics don't look quite right or Sonic's eyes are the wrong color. Corless doesn't subscribe to that idea though, and thinks that there's just a lot of them, with their own ideas about what makes a Sonic game.

Corless said that the core fans were very vocal and got a lot of attention, but they were also incredibly passionate about Sonic. He said that their energy and love for the brand had made the creation of Sonic 4 all but inevitable, and that Sonic Team was committed to making a game that those hardcore fans would love. "The audience fit was right and has allowed us to develop a game as close to the classic games as we could make," he said. "And the reception for the game so far has shown it's been the right decision."

Sonic 4 is one of three games that Sonic Team is working on, each aimed at a slightly different audience, and Corless was confident that the future of Sonic the Hedgehog was bright. "Daft Punk put it well," he said, when asked where he saw Sonic in five years. "Better, faster, stronger."