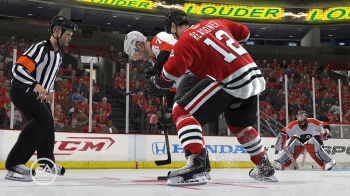 From comic books to television to superheroes wielding hockey sticks, Stan Lee can do it all.

Stan Lee's name can be found everywhere nowadays, with the famous superhero creator now becoming known for more than just comic books. Though his latest venture involves superheroes once again, these heroes mostly just hit a puck into a net.

The NHL has teamed up with Stan Lee to create Guardian Media Entertainment, which will oversee the Guardian Project: a set of 30 NHL-themed superheroes (one hero for each NHL team). These "Guardians" will incorporate "NHL elements," but their story won't take place on the ice.

The 30 heroes will be revealed during a presentation at the 2011 NHL All-Star Game on January 30, 2011, though a teaser will be shown at the New York Comic Con on October 8. The NHL and GME hope to bring a new audience of "tween boys" to the NHL, while also hoping to "engage the existing, established hockey fan base through a compelling tale of good vs. evil." I can understand the targeting of youths, but do they really think the hockey heroes are going to engage fans that cheer happily when players are knocking each others' teeth out?

Though the heroes may sound shallow, Lee says the Guardians will have an "epic story" behind them. They won't be based off of mascots, but they will feature powers based on their associated teams' names. For example, the Philadelphia Flyers hero will be able to fly, while the Calgary Flames hero will be able to control fire. The heroes will also have personal rivalries based on NHL team rivalries, and will exhibit "personal problems and hang-ups." This is starting to become less fun.

The Guardians are planned for use in comic books, a novel, mobile applications, television, and film. I think it's safe to say that Stan Lee will make anybody or anything into a superhero if the price is right, even an Anaheim Duck. You know, I can't really blame him: I like money too.