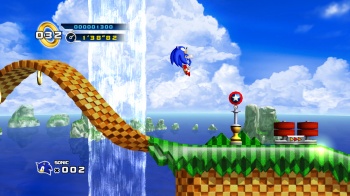 Internet fame awaits those that must have Sonic on every device possible.

By mid-October, Sonic the Hedgehog 4: Episode 1 will be available on four different platforms: XBLA, PSN, WiiWare, and iOS. Fans of the Sonic titles from the Genesis days were probably planning to pick it up already, but likely on just one or two devices at most. On the other hand, if you want to go overboard and buy it on every platform, Sega is promising to post on the internet that it likes you.

As revealed on Sega's forums, the company will be offering three levels of loyalty bonuses to Episode 1 buyers. If you can prove that you've bought two or more versions of the game, Sega will provide an appropriate reward.

Purchasers of two versions will get their names posted on an MVP list within a "special sticky thread" on the Sega and Sonic 4 forums and websites. Those that buy it on three platforms will get the same, a shout-out on the Sega blogs and Sonic 4 website, a bucket of digital kittens (Sega's horrifying kitten link, not mine), and placement in a "cool spot" elsewhere that is still to be revealed.

And if people really go crazy and buy Sonic the Hedgehog 4: Episode 1 on the Xbox 360, PlayStation 3, Wii, and iPhone/iPad, they'll get all of the above and a special video shout-out from Sega employees that will be posted on YouTube and Sega's websites. So if you've got a spare $55 laying around, go for it.

I'm not one to criticize marketing tactics, but it feels odd that Sega is promoting what seems like needless spending by offering brief internet fame. I seriously doubt that Sonic fans need what is basically an identical version of the game on three separate consoles. At most, a console and a handheld device purchase makes sense. Still, we know there are going to be people buying all four versions just because of this promotion, and some of them may even be reading this sentence right now. I forgive you.