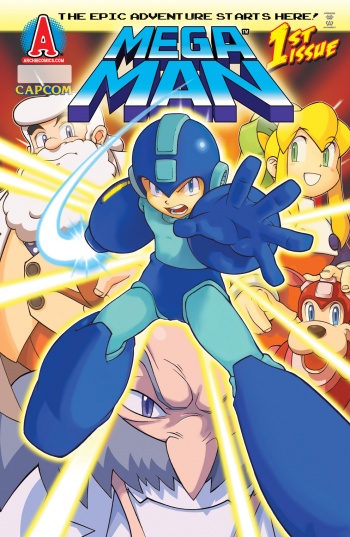 The company behind Archie is leaving Riverdale behind to give Mega Man his time to shine.

Archie Comics has announced that it'll be producing a brand new monthly comic book series featuring Capcom's Mega Man. For now, the book will focus on the classic Mega Man first seen on the NES, but variants on the original blue bomber are also planned for the future.

Mega Man #1 will hit newsstands and comic book stores in spring 2011. The creative team putting the series together is artist Patrick Spaziante and writer Ian Flynn, known for their work on Archie's Sonic the Hedgehog books.

Archie Comics is promising a faithful take on Mega Man and his universe, with editor Paul Kaminski saying it will "hold true to the spirit of the old school with a fresh eye on Mega Man's strong potential in the world of American comics." The book apparently even names Mega Man Rock, his original Japanese title, when not wearing the helmet.

Though an entire twelve issues (or more) could likely be filled up with Mega Man's attempts to get past those frustrating disappearing platforms, it's unlikely. Instead, we'll probably see various robot masters show up and cause mischief, with Dr. Wily as the series' main villain.

If the book does well, Kaminski says Archie hopes to "fully explore not only [the] classic world, but the other spin-offs including Mega Man X, Mega Man Zero, Mega Man Legends and more." CEO of Archie Comics Jon Goldwater says that the creative team understands Mega Man "inside and out."

The entire announcement of the comic series indicates that Archie wants gamers to be proud of their version of Mega Man. For the series to do that, I think it'll have to represent what Mega Man is all about, which is progression and enhancement. If robot masters are actually destroyed and absorbed by Mega Man, never to return, I think that would make for a more compelling story than one where the same enemies constantly get knocked out and come back in a later issue. We'll see if Archie can pull of its goals for the series next year.