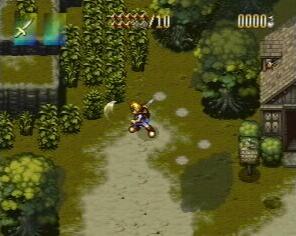 RPG fans that never owned a PlayStation will want to check out the PlayStation Store this week.

Though there are many beloved RPGs from the PlayStation era, they've been very slow to come to North America on the PlayStation Network. By my count, we've gotten less than ten, but at least they've been the likes of Suikoden, Grandia, and the entire PS1 Final Fantasy series. Thankfully, RPG fans will get another treat this week, with Vic Ireland of Gaijinworks unofficially announcing that Alundra and Arc the Lad will be available Tuesday on the North American PSN for $5.99.

These are two very different titles that each have their own unique strengths. Alundra is basically the PlayStation's version of Legend of Zelda, though it might not have as much charm as the Nintendo series. It has a big open world for players to explore and dungeons filled with puzzles, but a much more depressing storyline than you'd ever find in Zelda. The main villain in Alundra attacks and kills people in their nightmares, with Alundra the only hero that can go into their dreams to save them. It's really a lot of fun, lengthy, and definitely worth it for the meager PSN cost.

Arc the Lad is a tactical RPG originally released in North America through a compilation of three games called Arc the Lad Collection. It uses a top-down view instead of the isometric visuals often seen in similar games. The story follows Arc as he searches for his missing father and protects humanity from evil. It's not as long as Alundra, so I'd pick that instead if you only have $6 to your name, but Arc the Lad is a decent tactical game too. The PlayStation versions of Arc the Lad are considered superior to those on the PlayStation 2, if you've ever played those.

Alundra appears to have a rights issue keeping it from also being released on the European PSN. Future releases from Gaijinworks in North America and Europe all depend on sales, with Ireland saying: "It's a complete pain in the butt to get older titles licensed and ready for PSN." For it to be worth his while, he says the games will have to sell at least in the 20,000-30,000 range. While there are "lots of possibilities" for the future, including "PS1 content that was never localized," the amount of money coming in will be the deciding factor.