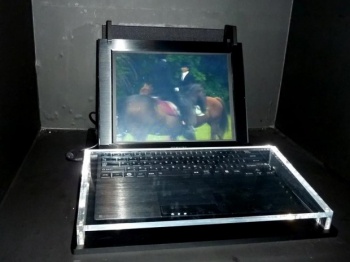 In addition to creating glasses-free 3D televisions, Toshiba is working on integrating the eye-popping technology into laptop computers.

Last week, Toshiba's upcoming line of glasses-free 3D televisions was revealed, but the company doesn't plan to stop there. Japanese newspaper Nikkei is reporting that Toshiba also has glasses-free 3D laptops in development that are sure to make even working on spreadsheets fun.

While the 3D televisions are scheduled to launch in Japan this year, the laptops won't make it out until 2011, and even then they'll likely remain in Japan for a while. Toshiba's Dynabook brand will now feature laptops that require glasses for 3D like other manufacturers, and these glasses-free machines.

The first glasses-free 3D laptop planned is a 12-inch model, which is on the small end for laptop screens, though larger displays will come with time. Toshiba's televisions with similar technology are launching in 12-inch and 20-inch models to start.

Details revealed that users will be able to choose specific aspects of the screens to remain in 2D while other portions will be displayed in 3D at the same time. This could mean that while a rocking 3D game of Minesweeper is running, you'll still be able to type a paper without going nuts. A specific release date and pricing don't appear to have been announced yet, but with the 12-inch glasses-free 3D televisions priced at ¥120,000 ($1,440), expect something higher than that.

For Science!: 7 Tesla Inventions That Others Took Credit for Rhykker 19 Comments