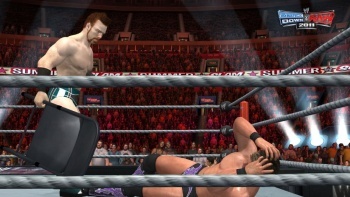 THQ has unveiled the next step in its strategy to combat used game sales: Encouraging customers to keep their games by charging them up-front for DLC that hasn't been released yet.

You've no doubt heard of "try before you buy," but THQ has something a little different in mind for the upcoming WWE Smackdown vs. Raw 2011. Think of it as "pay before you play": In order to convince gamers not to trade in their copies of the game two weeks after buying them, the publisher is offering a "Fan Axxess" pass (yes, "Axxess," which I assume is how you spell "access" after you've been hit over the head with a chair once too often) for a one-time payment of 800 Microsoft points or $9.99 on the PlayStation Network. The pass will provide access (or "axxess") to "select downloadable content released throughout the life of the game for a one-time anticipated purchase."

That's right, THQ wants you to pay up front for DLC that hasn't even been made yet. Why would you do such a thing? For one thing, it'll be cheaper than buying all the add-ons individually. The first DLC pack, slated for release over the holidays, will cost non-Axxess members 560 Microsoft points (about $7.00), while the second, due in early 2011, will go for 240 points. Fan Axxess will also provide immediate access to more than 60 unlockable items included with the game and there's a certain prestige factor as well, as those who buy into the program will be given "an in-game badge to recognize the videogame's biggest supporters".

"We have some of the most passionate fans in the industry, and we are pleased to offer them an opportunity to access premium gameplay content, customization features and recognition for their loyalty for one price point," said THQ Executive Vice President Danny Bilson.

The DLC updates sound like they'll add a lot to the game, including wrestlers like the British Bulldog and Lex Luger, alternate ring gear and arenas and the "WWE Superstar Attribute Customizer," which will let players set the rankings and attributes of every Legend, Superstar and Diva in the game. But paying for it up-front, sight unseen, sounds a bit dicey. What exactly does "select DLC" mean? And what happens if the game bombs and THQ suddenly decides the budget can't accommodate new content?

I like the Project Ten Dollar concept in general and fully expect it to become a common feature of the videogame industry. But with this, I suspect that THQ might be taking things a little too far. WWE Smackdown vs. Raw 2011 comes out on October 26 for the PlayStation 2 and 3, Xbox 360, Wii and PSP.