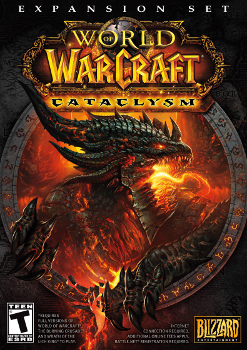 The world of Warcraft gets a major shakeup today, as Patch 4.01 heralds the beginning of the Cataclysm.

The release of Cataclysm, the third expansion pack to World of Warcraft, may be a month and a half away, but that's no reason that Blizzard can't start to ring in the end-of-the-world festivities. A Blizzard post on the WoW forums announced that maintenance would begin today for the release of Patch 4.01 - the patch that kicks in the Cataclysm changes before Cataclysm actually comes out.

The full patch notes can be found here, but really, here's all you need to know: Patch 4.01 will add Reforging vendors in all cities who can customize the stats on your armor. (You weren't using any of that Spirit anyway, were you?) It will implement all of the Cataclysm talent tree changes, which means that everybody is going to spend the next month and a half working out which class is now the most overpowered.

Perhaps coolest of all, though, is that Patch 4.01 implements the new Cataclysm Launcher, the new patch system that will actually let you stream and patch data while you're still logged in to Azeroth. True, there's something oddly ironic about needing to take the game offline for a full day in order to patch in a system that will let you patch the game without having to take it offline, but eh, I'm not going to complain.

It's the end of the world as we know it, people - and I'm pretty damn psyched. Why not check out our Cataclysm coverage while the patch is downloading?