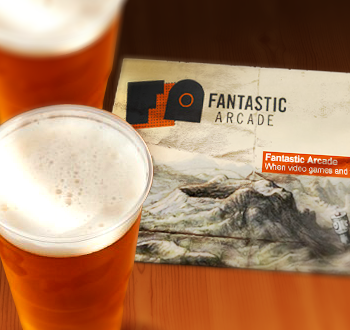 While the likes of PAX and NYCC might get all the attention, you can find some real gems if you're willing to venture off the beaten path.

It's exhilarating and fun being surrounded by your peers. But it can also be rather overwhelming, as an assortment of large corporations vies for the attention of thousands of gamers and geeks. Sometimes, you want something on a smaller scale where you can hear yourself think, and be free from the constant assault on your senses. It might sound like a fantasy, but in Issue 275 of The Escapist, Robert Rath thinks he's found just the place.

Welcome to Fantastic Arcade, the new voice of indie gaming.

Headquartered in the famed Alamo Drafthouse theater and its nearby bar The Highball, Fantastic Arcade is the new wing of the insanely popular film festival Fantastic Fest - four days of game demos, industry panels, competitions, and film screenings devoted to the emerging independent game scene.

Attendance is all killer and no filler. While the demo room gets foot traffic from Fantastic Fest at large, panel attendees consist almost entirely of industry people, journalists, professors, and garage developers. There isn't a fanboy in sight, and, in four days of events, I don't catch a single word of leet speak. At times, I feel like our small group of insiders is an Illuminati cabal, plotting an industry coup.

Even better, no one tries to sell you shit. Apart from Waypoint's announcement of an animated series about two buddies who play Halo, dubbed Apartment 117, there's no attempt to build hype. Hard-sell ads and promos are mercifully absent. The closest thing to booth babes are two conservatively dressed blondes from Time Warner who hand out swag while pausing occasionally to shoot desperate glances at the bar. In the primetime afternoon spot that would usually hold a launch announcement, Fantastic Arcade held an ethics panel.

Attracting pioneering game makers like Jonathan Blow and Richard Garriot, Fantastic Arcade is already a show to watch. You can find out more about it in Rath's article, "Tripping the Arcade Fantastic."

Editor's Note: I Like To Move It Russ Pitts 6 Comments

Letters to the Editor: I Like to Move It The Escapist Staff 0 Comments