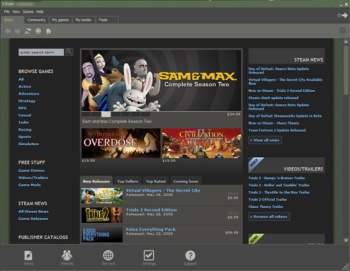 Analyst Michael Pachter predicts that Valve will soon let you trade in games that you've bought on Steam, for a small fee.

Steam is by far the most ubiquitous PC games download service that we've ever seen. Tons of people use it to play PC titles and keep their saved games on the cloud. But Michael Pachter, an analyst from Wedbush Morgan and outspoken pundit of the videogame industry, predicts that Valve will attempt to cash in on the used games market by allowing you to trade in games that you've purchased on Steam for credit that you can use to purchase other games. Steam itself will only take a small fee for such a transaction.

"Steam is phenomenal, it's a great service," Pachter told NowGamer. "Steam gives gamers enough other stuff so that they don't resent the fact they can't trade in their games. And you know, name all the Steam games that you've purchased that you've traded back in to somebody else for credit. Steam's about to let you do that supposedly, you know like trade and exchange, but they're going to take a fee from it."

Pachter has been wildly wrong with his predictions in the past, like a "premium" multiplayer service for Call of Duty, but sometimes he's spot on, like when he posited a new Twisted Metal game.

What do you guys think? Would you like Steam to be able to accept your old game, basically turning it off in your Games Library, in exchange for credit that you can use in purchasing another game?

It's so crazy that it just might make sense.