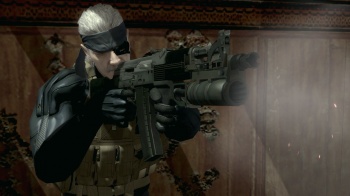 The creator of Metal Gear has begun working on the next game that will engrave his name on the cover.

Hideo Kojima is a big name in the videogame industry with good reason. Kojima's Metal Gear Solid series is one of the most popular videogame franchises of all time, his other titles include cult-classics Snatcher and Policenauts, and Kojima recently put in work on the well received Castlevania: Lords of Shadow. Kojima's next "Hideo Kojima game" has now begun planning, which means another gem will be headed our way ... eventually.

Not that everything Kojima touches is gold, but the games that bear his name tend to be worth playing. He recently defined what it means to make a "Hideo Kojima game," meaning a game that has his name on the cover, where he said everything included basically comes from his brain. The main entries in the Metal Gear series are "Hideo Kojima games," while Metal Gear Solid: Rising is not. A Kojima tweet has emphasized that his next game will be another mostly dreamt up by him.

Kojima tweeted: "Had our first meeting for the next 'A Hideo Kojima Game' with the core team members today. Some members are also participating on Rising so 10 people total this time. We will have a meeting every morning to discuss planning, testing, research, and scouting. An open environment to talk about important issues and share our dreams and concept for the project."

It's tough to discern what the game will be because there just aren't any details here. The speculation should probably start at a new Metal Gear title, move on to a new Snatcher, throw some Zone of the Enders and Boktai in there, and make a full circle right back to Metal Gear again. Though Kojima seemed to want to kill Solid Snake off at the end of Metal Gear Solid 4, the fact that he didn't do it means he could bring him back for a triumphant return, hopefully without the arthritis and back pain this time.