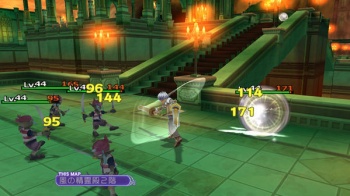 Sim fans that missed out on the Wii's Rune Factory Frontier will be getting yet another chance to kill goblins while growing corn.

The Rune Factory series is an interesting beast that combines the farming seen in Harvest Moon with a dungeon hack. It's developed by Japanese studio Neverland Company and has seen multiple Nintendo DS entries with another on the Wii called Rune Factory Frontier, which was a fun title that many gamers looking for a farming/dungeon hack probably missed. For those that enjoyed it, a sequel has been announced.

Neverland Company revealed Rune Factory Oceans this week for the no doubt huge subset of consumers looking to wait for watermelons to grow while they raise violent sheep to help them kill dungeons full of creatures. Rather than just stick with the Wii this time, Neverland is also releasing the game on the PlayStation 3 and will include Move compatibility.

In Frontier, it was quite possible for players to spend hundreds of hours planting and harvesting crops, cooking, doing alchemy, crafting weapons, fishing, romancing women, and tearing into dungeons over and over to collect new materials. It was an odd mix that sometimes became tedious, but the content available to players was quite hefty. In fact, Nintendo statistics show that it holds one of the top averages in hours played per person above other games like Mario Kart Wii and Legend of Zelda: Twilight Princess.

Oceans will hopefully tweak the formula laid out in Frontier and add to what made it fun. Instead of taking place in a single town, Oceans has players traveling across the sea on a humanoid giant named Ymir to find new lands, and it'll also feature battles against massive sea creatures. In addition, the main character is now oddly both a male and female in the same body, so you can imagine the hijinks that probably ensue. The game has only been announced for Japan so far, but with Rune Factory Frontier's decent reception in the West we could see it come overseas on the Wii, and maybe even PS3 too.