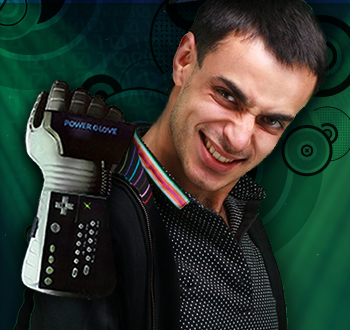 Motion controllers would have a long and illustrious history if they hadn't all sucked so hard.

Core gamers will often turn their noses up at motion controls, dismissing them as mere playthings that couldn't possibly stand against the technical perfection of a control pad and the immense raw power of a gamer's thumbs. Over the years there have been a number of attempts to get gamers up off the couch and moving around, usually ending in dismal failure. In Issue 275 of The Escapist, Brendan Main takes a tour of some of the motion controlled non-starters of yesteryear.

To listen to the hype surrounding Sony's Move and Microsoft's Kinect, motion control is poised to become all things to all people. This is the explicit message of Sony's "this changes everything" ad campaign, which rattles off a range of game genres and play styles before concluding that Move "changes everything." Microsoft's unorthodox, skeleton-sensing Kinect seems custom designed for more obscure applications - evidenced by the blood-chilling spectacle that is playtime with Skittles the Tiger. This is all well and good if you are a casual customer wondering if you'll get your money's worth, or, say, a precocious child wondering if you'll get to command an adorable jungle cat as your own unholy familiar. But I am a simple man, with simple tastes. I don't need a device that does everything. I'm on the lookout for one very specific thing.

How does it feel to just up and punch a guy?

I know I'm not alone. In fact, older motion control systems have often boasted exactly this type of gameplay, not that they have always been up to the task; most now have been left to the garbage heap of gaming's history. Always being up for a bit of the old ultraviolence, I decided to track them down, dust them off, and see how they stacked up against our modern expectations. Not as games, or even as technologies, but as something far cruder - as punching simulators. Which ones pack a punch, and which ones are just punchy? Old pitted against new, literally mano-a-mano. Not for me, or for gamedom in general. For civilization.

It didn't matter if he was wiggling fingers, punching and kicking infrared beams or prancing around in front of a camera, Main found that none of the controllers truly replicated the feeling of popping a guy in the jaw. You can read more about it in his article, "I Punch the Body Electric."

Context Sensitive: Who Is the PS3 For? Susan Arendt 163 Comments

Letters to the Editor: I Like to Move It The Escapist Staff 0 Comments

Topical Tuesday: The Reign of Motion Controls The Escapist Staff 18 Comments
Comments on