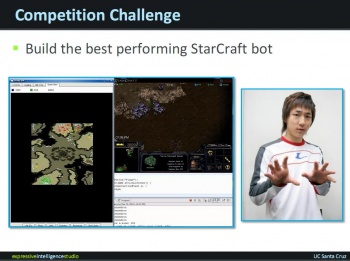 An artificial intelligence competition was held this week which pitted bots against each other in StarCraft: Brood War to see which AI reined supreme.

At the AI and Interactive Digital Entertainment (AIIDE) Conference held in at Stanford University in Palo Alto, CA, this week, 28 bots submitted from all over the world competed against each other and an expert human opponent. Four different tournaments were held: Micromanagement, Small-scale combat, Tech-limited game, Complete game. Each tournament was double-elimination, and winners were determined by who did the best 5-game matches. With Blizzard's blessing, the AI bots hooked into the Brood War API and participants were encouraged to think outside the box when crafting their logic. The winning bot in the Complete Game tournament was dubbed Overmind and it was submitted by UC Berkeley.

The AI bots were also tested against an expert human player: Oriol, a Brood War veteran from the 2001 WCG StarCraft competition. Most of the bots were easily handled, but the best did give him a run for his money.

It's very cool that these competitions are held to further the development of the artificial intelligence used in strategy games. It reminds me of Deep Blue vs. Kasparov, only StarCraft is way more complicated. I hope that game developers at Blizzard and other companies were on hand to pay attention to the innovations of the bots that competed. I'm sure there is a thing or two to learn about making challenging but fun AIs to play against.

A slide presentation of the competition results can be found here but I've listed the winners and runners-up below for each tournament.

Runner-up: University of Sherbrooke
Created by: Anthony Jo Quinto, Steve Tousignant & Frederic St-Onge
Description: The bot uses primarily states machines to make decisions and it can recognize the strategy of its opponent.

Same results as above

Runner-up: Krasi0
Created by:Krasimir Krastev
Description: The bot uses FSMs based on my knowledge of the game.