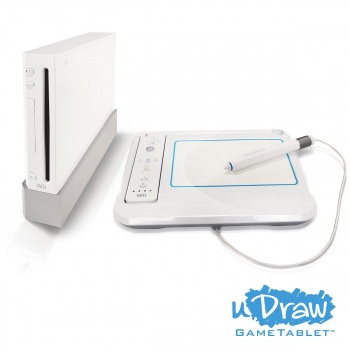 THQ's uDraw is a peripheral unlike any before it, and it's coming out this year.

If you haven't heard of THQ's uDraw, listen up because it has the potential to be a sleeper hit this holiday season. uDraw is a drawing tablet peripheral for the Nintendo Wii revealed in August and was once scheduled for release in 2011. THQ recently announced that it's coming out this year instead.

uDraw is basically Microsoft Paint for the Wii, but it has it's own wireless tablet and pen. Using various tools like stamps and line editors, users can create almost anything they want and export their images on an SD card. Each creation can even be played back in a replay mode to show people how it was made through each stroke.

The uDraw tablet comes bundled with uDraw Studio, but two actual games will launch right alongside it. Dood's Big Adventure and Pictionary will not only use the uDraw tablet, but they'll require it, with more titles planned for 2011. Pictionary is self-explanatory, but Dood's Big Adventure speaks to the potential of the device as a platformer that has players using the tablet to create objects and attack enemies.

uDraw will be released on November 14, 2010 for $69.99, which is not a bad price for a drawing tablet that can also play games. It's yet another unique addition to the Wii's accessory library that should enable people to play new kinds of titles, and who knows what kinds of mods people will create by hacking into it. These types of things tend to fly off of retail shelves, so if you want one this holiday season, you probably should pre-order.