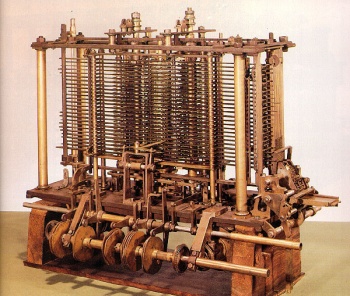 The analytical engine that started construction in the early 1800s but was never finished may finally be completed someday.

One of the world's first programmable computers was conceived by Charles Babbage all the way back in the 1830s with his "analytical engine," which is not unlike something you'd see in the world of steampunk. In fact, it was even powered by steam. Unfortunately, the machine was never finished, but a modern-day computer programmer wants to change that.

Babbage worked on the analytical engine for decades until he died in 1871, but denied government funding for the expensive device ended the possibility of it ever being finished. For its time, the analytical engine was an advanced idea that potentially would have been able to solve complex equations long before computers of the early to mid 1900s.

John Graham-Cumming of the UK hopes to succeed where Babbage's government failed him by raising the funds to build an entire analytical engine as originally envisioned. Graham-Cumming is trying to acquire £500,000 ($800,000) to build what he calls "an inspirational piece of equipment."

"What you realise when you read Babbage's papers is that this was the first real computer," Graham-Cumming told the Telegraph. "It had expandable memory, a CPU, microcode, a printer, a plotter and was programmable with punch cards."

Pieces of the analytical engine have been assembled in the past, but a complete, working model hasn't ever been put together. To complete the task would require the deciphering of Babbage's original designs, in addition to the large number of parts needed.

Graham-Cumming has promised to set up a non-profit organization dedicated to building the analytical engine if he raises the necessary funds. Once completed, the machine will be donated to a museum. If you'd like to help, Graham-Cumming has set up a donation page here. It seems like he's got a long way to go, but it'd be really cool if he could pull this off.