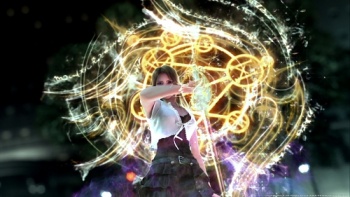 The Final Fantasy series' sole remaining PS3 exclusive title may not be exclusive for much longer.

Back in May, we first heard rumors that Square-Enix was considering making Final Fantasy Versus XIII a multiplatform title, instead of just releasing it on the PlayStation 3 as originally planned. The rumor came from what was an admittedly vague statement, though, and it's easy to just brush off a single instance like that as mere coincidence.

Two instances, though? That's slightly harder to dismiss. Earlier today, Square-Enix posted a job listing for a Final Fantasy Versus XIII "Battle Planner." The requirements for the job include experience working on a 3D action game, experience in both level and battle design, and "development experience on a PS3, or Xbox 360 package title."

That specific reference to an "Xbox 360 package title," naturally, has some Final Fantasy fans - and PS3 fanboys - up in a tizzy. Given that many JRPG fans are said to have initially bought PS3s specifically for FF13 and FFv13, it is perhaps understandable - but some of them take it a bit too far.

This is, of course, just a silly little coincidence, and it's entirely possible that the request for Xbox 360 development experience has nothing to do with Versus XIII, but rather some other game that Square-Enix could develop in the future.

It is enough to make you think, though. Isn't it?