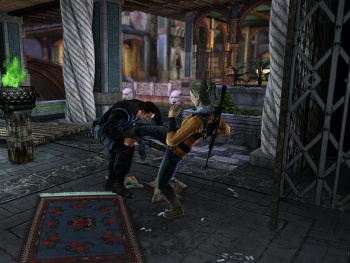 A new partnership has formed to edit violent games that might not make it to the Middle East otherwise.

Officially, life in the Middle East isn't easy for gamers. Games with certain types of content are often banned, but thanks to a new initiative this may not be the case for too much longer. Production company Rubicon Group Holding and distributor Modern Electronics Company have joined forces to significantly edit certain titles to ensure that they can be released in the Middle East without issue.

Titles that have been recently banned in the region include Dead Rising 2 and Mafia II, due to their inclusions of violence, gambling, alcohol use, etc. Grand Theft Auto in the Middle East? Forget about it.

In the initiative, Rubicon says it will both edit out scenes deemed unsuitable and add new region-specific content. "It's not purely dubbing in Arabic, but eliminating things that may be inappropriate for the region," Rubicon executive director Ghassan Ayoubi told the National. "[It's] introducing one or two elements that will be specifically for the region - maybe introducing a new character."

"It's not censoring ... it's tailoring or customising it for the market," Ayoubi added. The plan is to make certain games "entertaining, but not necessarily insulting." Rubicon hopes to work on 2-4 PlayStation 3 games per year, beginning with titles that have already been released and eventually moving on to games in development.

Ayoubi mentioned Fifa 11 and the as of yet unannounced Uncharted 3 as specific titles that Rubicon might edit for Middle East release. Though it sounds like Rubicon would have to make some heavy edits in certain cases, the company doesn't plan to work on every game. "There are titles that we wouldn't even choose to Arabize or localize, because they are off the chart, because they would need reinventing," Ayoubi said. Rubicon also plans to someday develop its own games for the region.

While I'd hate to see a game like Uncharted 2 replace its enemies with bears, or guns with fish that shoot rainbows, you can't say that'd totally be a bad thing if it means Middle Eastern gamers get to legally experience the rest of the title. Rather than get depressed about certain games that will never make it to the Middle East, gamers in the region can now look forward to more experiences, even if they're heavily edited. At the same time, are you really reading Catcher in the Rye if a few chapters are swapped out for new ones?

Muslims in My Monitor Saladin Ahmed 434 Comments
Comments on