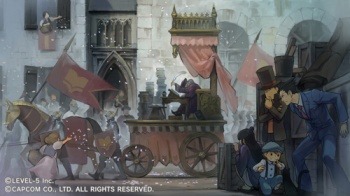 If Western want to spot the contradictions in some fiendish puzzles, they're going to have to shout loud enough for Capcom to hear.

If you're one of the sizeable number of people excited about the recently revealed Professor Layton/Phoenix Wright crossover, then Capcom has a little bit of bad news for you. In a post on the Capcom Unity blog, Joveth "jgonzo" Gonzalez said that the game is only confirmed for Japan, with no current plans to release it in the West.

The decision to limit the game to Japan for the time being may come as a surprise to some, but a look at Capcom's figures for the lifetime sales of the Ace Attorney series - 3.9 million spread over 13 titles - suggests that Phoenix Wright has niche, rather than mainstream, appeal. Sales for the Professor Layton games are more robust however, with nearly ten million games sold since the release of Professor Layton and the Curious Village in 2007.

It seems reasonable to assume that Capcom is worried about how much appeal the game will actually have in the West, an assumption bolstered by Gonzalez' comments that Capcom might release the game outside of Japan if fans showed enough support. A better idea of the size of the audience for the crossover might assuage some of Capcom's apparent fears over releasing the game in the West.

Not a lot is known about the crossover, except that it has a working title of Professor Layton vs. Ace Attorney, and it involves the investigative duo becoming embroiled in a witch trial in the mysterious medieval Labyrinth City.