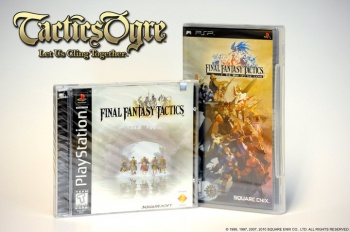 Killing a bear in a tactical JRPG like Tactics Ogre might earn players a special item, but in real life all you would get is a big, gross mess. Square Enix is thankfully bringing some of that mission-based gameplay into the real world with a promotion that awards players with something less disgusting for completing specific tasks.

The Tactics Ogre mission headquarters was created to promote Square Enix's upcoming PSP remake of SNES tactical RPG classic Tactics Ogre: Let Us Cling Together. The game won't be out in North America until sometime in early 2011, so completing Square Enix's missions will have to help tide you over.

The first mission runs until October 25 and asks people to fill in the captions of four screenshots. My captions involved fried pickles, so yours may not. The winner will get two surprisingly cool prizes including one copy of Final Fantasy Tactics: War of the Lions for the PSP and one copy of the original Final Fantasy Tactics for the PlayStation.

The image provided of the prizes from Square Enix indicates that this will be a sealed copy of the PS1 game, and not a ticket to download the version currently available on the PlayStation Network. It's a bit odd to give away a game in the original format released nearly 13 years ago, but at the same time it's kind of awesome in a retro way. There are slots on Tactics Ogre's HQ for 11 more missions, so hopefully the prizes will get even better as time goes on, and the missions will become even more fun.