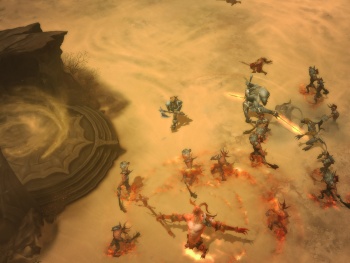 If you're worried that your characters in Diablo III won't be very customizable, worry no more: Every class has almost a hundred billion different possible builds.

Developing a sequel to an intensely beloved game like Diablo II is one tall order. Hardcore fans of the first two Diablo games will be watching the game like hawks, ready to complain about anything - from the game's color palette on down. One thing they probably won't be able to complain about, however, is a lack of complexity.

The Escapist spoke with Blizzard's Alex Mayberry, senior producer on Diablo III, prior to tomorrow's ceremonies that kick off BlizzCon 2010. With the new overhauled skill system and the different runes that influence them, said Mayberry, one of the team members had done the math to work out how many possible build combinations there were for every class in the game.

The answer he came away with was a staggering 97 billion potential combinations. That's before taking into account any equipment, weaponry, or attribute-boosting gems, too - which will almost certainly boost that number to hard-to-believe heights.

Of course, given the nature of Diablo, only some of those builds will end up being very feasible in the long run. On the other hand, there will always be players who want to try something bizarre and unique just because they can - and they'll have billions of options to choose from.

We'll learn more about the new skill and rune system tomorrow once BlizzCon 2010 begins in earnest.