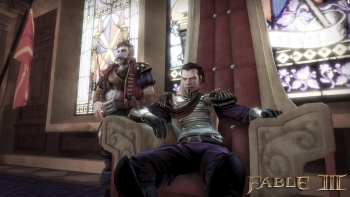 Peter Molyneux always purchases a retail copy of every game he finishes, even though he could get one for free.

Peter Molyneux is a pretty interesting guy. Despite working in the videogame industry for more than two decades and having developed titles such a Dungeon Keeper, Black and White, and the upcoming third Fable, he still recently said in an interview that he's never made a great game. In that same interview, he revealed a ritual where he gives himself money every time he completes a game.

Molyneux told MCV that he purchases a copy of every game he develops in a regular retail store with his own money. "I always do the same thing," he said. "I always go into a shop, buy my retail copy and go back and play the game."

The purpose is not only to complete a seemingly superstitious ritual, but to give Molyneux a view of his own game through the eyes of a consumer. After purchasing one, he sits down and plays it just to play. "Really it is the first time I play it without writing a long list of things," he continued.

"And it is the first time I think about the design going forward," Molyneux added. This may be why Molyneux can be so critical of himself to call certain aspects of his previous games rubbish, and say that they're not necessarily great. Molyneux feels that his ritual gives him a better view of where he should take games like Fable in the future.

For now, Molyneux calls Fable III a game that everybody should try. However, he says: "I'll probably still be slagging it off in a year's time."

Humility is good quality for a game designer to have, but I'm not sure he really needs to buy his own game. Can't he get a shrink-wrapped copy right off of the Microsoft Game Studios factory line? Do you think Molyneux waits outside of a GAME at midnight with the rest of the common folk? If you work in the videogame industry, you might as well take advantage by getting a free copy of the game you just made.