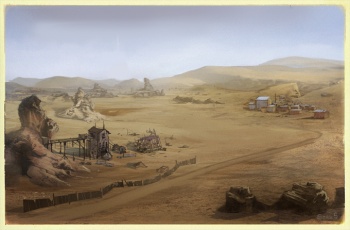 Interplay President Eric Caen says the spat over the Fallout MMO could have been avoided if Bethesda had taken Interplay's offer to buy out the rights to full IP - for 50 million bucks.

In September 2009, Bethesda launched a lawsuit against Interplay, alleging that it had failed to achieve certain milestones in the development of the Fallout MMO and thus defaulted on the right to create the game. Interplay disagreed, of course, so off to court they went. Bethesda dropped its effort to force Interplay to stop work on the game in April 2010, although the lawsuit (and Interplay's counter-suit) continues. But Interplay President Eric Caen says Bethesda could have had the Fallout MMO if only it had been willing to pay the asking price.

"[Interplay CEO Hervé Caen] said, 'If you want the full IP, the value of it is $50 million.' They said, 'No way. Why $50 million?'" he said in an interview in Edge Magazine. "We said, 'Because the MMOG strength of this universe is huge.' Bethesda said, 'We don't want that. Let's buy everything else but the MMOG. Do the MMOG.' They said that Interplay had to start development and by a certain time we had to have a full game in development."

That time clause is what eventually sparked the lawsuit between the two companies, although Caen said he thinks the real motivation was Bethesda's delayed recognition of the true value of the franchise. He also thinks Bethesda was surprised by the fact that Interplay was actually able to rise from the grave and get moving on the project.

"They bought everything, but left Interplay with the license to do the MMOG - under certain conditions, thinking that Interplay would never fulfill these conditions. But Interplay did. Spring 2009 - this is public information - Bethesda sends a termination letter to Interplay, saying, 'You did not fulfill your obligation.' So all the litigation is about that," Caen continued. "I think Bethesda, off the back of Fallout 3's success, realized that Hervé was probably right about the value. They said, 'OK, how can we get that without paying?'"

For now, the two sides seem to have reached a sort of detente. Bethesda is reaping the rewards of Fallout: New Vegas, the recently-released Fallout RPG developed by Obsidian, while work on Fallout Online, previously known by the codename Project V13, continues apace at Interplay. Assuming there will be no other litigational speedbumps to slow things down, Fallout Online is expected to come out sometime in 2012.