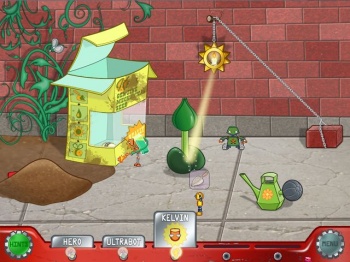 Want to solve puzzles using tiny robots? Puzzle Bots is the perfect game for you.

Dave Gilbert's Wadjet Eye Games recently announced that Puzzle Bots has hit Steam for a low, low price. At just $5, you could do a lot worse than a humorous puzzle/adventure game where you play as miniature robots that inadvertently prepare food for their inventors, fix the equipment in a robot lab, and solve a mystery.

Puzzle Bots is similar to an adventure game with its narrative and interface, but the gameplay is mostly about solving puzzles. Players start with control of just one robot with a single ability, but are eventually controlling five little robots at once as they attempt to get through 17 multi-part levels. It's a little bit like Honey, I Shrunk the Kids, except with robots instead of kids, and without Rick Moranis.

One of the robots can only pick up items, another only pushes heavy objects, while the the rest can perform abilities such as swimming or using a flamethrower. Each robot has its own personality and take on the outside world, and their interactions with each other are a highlight.

Meanwhile, the larger story of Puzzle Bots takes place in a lab and follows the robots' mostly cheery inventors while the secrets of the robot factory are discovered. The game has a lighthearted sense of humor and players may even incite a robot dance party for finding bonus items that decorate the miniature robot habitat.

Puzzle Bots is the latest title to come out of Wadjet Eye, which is known for other games such as the Blackwell adventure series, Shivah, and Emerald City Confidential. They're all experiences that come at a fairly minuscule cost, but provide a worthy amount of fun.